A graduate of the Iowa Writers’ Workshop who was born in Washington, D.C., God of Mercy is Okezie Nwọka’s debut novel. It is set in Ichulu and revolves around the life of the brave Ijeọma, a non-verbal girl who can fly. Once far removed from the influences of globalisation, this traditional Igbo village is now reckoning with changes brought about by warring gods, the encroachment of its colonised neighbours, and a girl who dares to challenge authority. Soon Ijeọma finds herself ostracised by her village and under the tyranny of a Christian church who in trying to absolve her of her alleged witchcraft, teach her the power of exercising merciful love in the face of difference. In this interview, Nwọka talks about what and who inspired this story, the difficulties of duality, and adapting Igbo language and culture for the foreign page.

Jane: What do you wish you knew before publishing a debut novel and what advice would you give to those hoping to do the same?

Okezie: I wish I knew how important it is to believe in your writing and the drafts that you produce. I worked with several people on this project and many of them had different ideas about how the novel should read. It wasn’t until I became stubborn and stuck with the draft of the novel that I liked best that there was real momentum gained and the novel was on its way to being published. So for future authors, I say believe in yourself and in your voice. You will know when the writing is ready to be seen by readers.

Jane: What compelled you to write God of Mercy?

Okezie: I really wanted to write a novel that spoke to how black societies could evolve without the influence of white hegemony. This was a question that stayed with me after reading novels like Things Fall Apart. I actually finished reading Achebe grateful for the white colonizers because they were the ones who saved twins like me from being cast off into the Evil Forest. Now I know the intention of Things Fall Apart wasn’t to have the reader sympathize with the white colonizer, but as a child reading the novel I couldn’t help but feel helped by the colonizer for saving outcasts like twins. This is why I thought it important to tell a story in which black people are helping each other survive this world.

Jane: Name some of your favourite books.

Okezie: My favorite books are Butterfly Burning by Yvonne Vera, Song of Solomon by Toni Morrison, Arrow of God by Chinua Achebe, Foreign Gods, Inc., by Okey Ndibe, As I Lay Dying by William Faulkner, and Anna Karenina by Leo Tolstoy.

Jane: God of Mercy is a treasure trove for anyone interested in Igbo culture. Tell us about the research process that led you to this story.

Okezie: I did a ton of research while I was in college. I don’t think I was looking for information to fit the life of Ijeọma (protagonist) specifically, rather I was researching Igbo communities as a whole and using what I found to create the customs and traditions seen in the novel. I used a combination of online research as well as oral research (I spoke to my family who is Igbo about various customs and traditions).

Jane: I’m very interested in how challenging it is to translate African languages. It’s impossible to find European alternatives for words that often contain a different way of understanding reality. How do you think English limits your novel?

Okezie: This is a really great question. I wrote this novel with Igbo speech patterns at the center. This means that while the novel is written in English, the cadence and rhythm of the language is Igbo. I borrowed this technique from Chinua Achebe who said that he writes his fiction in an anglicized Igbo, making the language familiar and unfamiliar at the same time. I don’t think that English limits my novel because it is after all an English language novel. I do think, however, that the English found in the novel is not one that belongs to England. It is one that belongs to the Igbo people inhabiting the story.

Jane: Your novel ends on a powerful note about the singularity of human compassion in the face of religious factionalism. Did you begin or arrive there?

Okezie: I arrived there. But in some way, I began there too. I started this novel with a question: What makes duality possible? How is it that two opposite things can coexist in a harmonious universe? I found in writing this novel that the answer is mercy. Mercy makes it so that our worst enemies can exist next to us and live just as we are living. So it made sense to begin and end the novel with these radical acts of mercy that define the novel’s theme and purpose.

Jane: Some say that your novel is heavily indebted to Things Fall Apart, a comparison that seems inevitable for any literary fiction about Africa. What do you make of this?

Okezie: Things Fall Apart has left a legacy of black-centered/Igbo-centered discourse in fiction: that is that black writing can center black people within itself for the purpose of exposing more of the human condition. I am forever grateful for the writing of Chinua Achebe and his mark on my debut is obvious. But there are other writers who have influenced this debut as well like Toni Morrison, Yvonne Vera, and Okey Ndibe. I think the best way to describe it is that I am a child of Igbo and black diaspora and so my writing is reflective of this reality.

Jane: God of Mercy is a celebration of those who have resisted colonialism. It is also a condemnation of rigid traditional practices. How did you negotiate this supposed tension?

Okezie: What a great question. I think this tension actually augmented the writing and brought out the different themes and subject matter I really wanted to explore. I think having internal tension in a novel makes for really great writing.

Jane: What’s the most important thing you learned in researching and writing God of Mercy?

Okezie: I think the most important thing I learned while writing God of Mercy was how powerful merciful love is. Every time a character performed an act of merciful love it changed the overall trajectory and mood of the story and made everything better. When I first started writing God of Mercy, I didn’t know what I wanted readers to come away with, but when the theme of merciful love made itself manifest I was so excited because it provided me with a solid message to share with my readers.

Okezie: I’m hoping to publish my second novel which brings the magical realism of Africa into the United States.

OKEZIE NWỌKA (he/they) was born and raised in Washington, D.C. They are a graduate of Brown University, and attended the Iowa Writers’ Workshop as a Dean Graduate Research Fellow. They are presently teaching and living in their hometown. God of Mercy is their first novel. You can find them on their website and @okezienwoka on Instagram and Twitter. 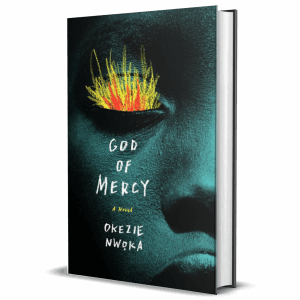 God of Mercy is set in Ichulu, an Igbo village where the people’s worship of their gods is absolute. Their adherence to tradition has allowed them to evade the influences of colonialism and globalisation. But the village is reckoning with changes, including a war between gods signalled by Ijeọma, a girl who can fly. As tensions grow between Ichulu and its neighbouring colonised villages, Ijeọma is forced into exile. Reckoning with her powers and exposed to the world beyond Ichulu, she is imprisoned by a Christian church under the accusation of being a witch. Suffering through isolation, she comes to understand the truth of merciful love. Reimagining the nature of tradition and cultural heritage and establishing a folklore of the uncolonised, God of Mercy is a novel about wrestling with gods, confronting demons, and understanding one's true purpose.