Based on folklore and mythology, The Perfect Nine is an epic about a group of sisters, the last of which is extraordinary. Following a period of regional unrest, Gikuyu and Mumbi have settled at the foot of Mount Kenya when 99 eligible suitors arrive seeking to marry the couple’s famously beautiful nine daughters—Wanjiru, Wambui, Wanjiku, Wangui, Waithira, Maceera, Mwithaga, Wairmu, and Wangari. To these 9 sisters of the original tale, Ngũgĩ wa Thiong’o adds a tenth: Warigia, a woman with crippled legs who is an excellent hunter.

The young women and their suitors are put to a test: they must find a cure for their youngest sister, the disabled Warigia, by plucking a single hair from the tongue of a frightening ogre king residing in the depths of the Kenyan forest. A traditional tale and episodic epic of allegorical adventures across treacherous landscapes, The Perfect Nine elegantly and captivatingly sings the heroic beauty of having courage in the face of fear. As the Bangladeshi-American author of this year’s highly celebrated Leave the World Behind writes in his review for The Washington Post, The Perfect Nine “has the hallmarks of myth: exaggeration, adventure, magic, and humor.”

A modern take on the origin story of Kenya’s Gĩkũyũ people, The Perfect Nine is one of those rare books about history that has, itself, made history. Having been longlisted for the 2021 International Booker Prize, it is the first ever title originally written in an African language to have made the cut. Wa Thiong’o is also the first to be nominated as both author and translator of the same book. None other is more deserving of these accolades.

In 1986, wa Thiong’o published his seminal work of criticism on African literature titled Decolonizing the Mind: The Politics of Language in African Literature. This collection of essays about African theatre, fiction, and language is most remembered for making a vital contribution to the ‘language debate’ and realising that, as Ainehi Edoro writes for Brittle Paper, “language is a systemic issue.” Wa Thiong’o outlines how African writers should reject European languages and elect to write in their native tongues. Languages are repositories of culture and contain entire worldviews: wa Thiong’o is adamant that true African literature must, by definition, be written in African languages.

African literature, particularly works like The Perfect Nine, is rooted in oral traditions and is, therefore, a perfect example of how essential meaning is lost when stories are ripped from the musicality of their mother languages. Often unfairly pitted against the alleged father of European-language African literature Chinua Achebe—an extraordinary wordsmith who believed in the power of bending colonial languages to your will—wa Thiong’o used the publication of his contentious work of criticism to bid farewell to English. He never wrote a book in English again. A few years prior, his work had been banned by the Kenyan government and wa Thiong’o was imprisoned, finding himself writing the first-ever Gĩkũyũ novel, Devil on the Cross, on toilet paper. In a 2006 interview with The Guardian, he said:

In prison I began to think in a more systematic way about language. Why was I not detained before, when I wrote in English? It was there that I made my decision. I don’t know if I’d have broken through the psychological block if not forced by history.

Translated into English by the renowned author himself, The Perfect Nine is so fluidly and effortlessly rendered that it instantly makes you forget it is a borrowed story. Having had his short story, The Upright Revolution: Or Why Humans Walk Upright, translated into 98 languages—many of them indigenous African languages—wa Thiong’o is also responsible for this most translated work of African literature. A staunch proponent of African-language expression and of “the beauty and musicality of all languages”, wa Thiong’o is one of the bravest and most progressive voices to have graced African literature.

And he is so in more ways than one. While unfamiliar to many, The Perfect Nine riffs on a traditional tale about the founding of the Gĩkũyũ people that is well-known throughout Kenya. The Gĩkũyũ people believe that these sisters and their husbands are the original ancestors of the various clans that make up their people. Published four years after Jennifer Nansubuga Makumbi’s Kintu—a spectacular novel derived from the Kintu myth and the origin story of Uganda’s Ganda people—The Perfect Nine also rejects postcolonial literature’s tendency to ‘write back’ and elects to make the so-called marginal central, celebrating indigenous modes of knowing and of storytelling.

Wa Thiong’o does, however, exercise individual creative freedom and modernise certain elements of this collective origin story. His version foregrounds the physical and mental prowess of the magnificent band of sisters, adding a whole 99 suitors—rather than the traditional tale’s original 10—to drive the point home. In his interview with The Booker Prizes, wa Thiong’o states that The Perfect Nine “is a celebration of feminist creative power and glory.” The man is too modest: The Perfect Nine is also an intersectional celebration of the unique power and beauty of people with disabilities. The star of the show, Warigia, is wa Thiongo’o’s invention and an unforgettable, inspirational character that reminds us of all the infinite possibilities within every one of us.

His first novel-like publication in over 15 years, The Perfect Nine gifts us a glorious and essential epic verse adventure about the founding of the Gĩkũyũ people from one of the greats of African literature. Known for classic novels like Weep Not, Child and A Grain of Wheat, The Perfect Nine marks a departure in wa Thiong’o’s oeuvre and is his first epic slash verse novel. That said, The Perfect Nine exposes the limitations of Western-derived formal classifications such as ‘verse novel’ and ‘epic’, inviting us into the world of Gĩkũyũ culture and drawing back the curtain on the vast literary landscapes beyond Western genres, stories, and languages.

NGŪGĪ WA THIONG’O is one of the leading writers and scholars at work in the world today. His books include the novels Petals of Blood, for which he was imprisoned by the Kenyan government in 1977, A Grain of Wheat and Wizard of the Crow; the memoirs, Dreams in a Time of War, In the House of the Interpreter and Birth of a Dream Weaver; and the essays, Decolonizing the Mind, Something Torn and New and Globalectics. Recipient of many honours, among them ten honorary doctorates, he is currently Distinguished Professor of English and Comparative Literature at the University of California, Irvine. 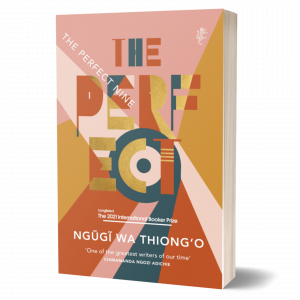 Gikuyu and Mumbi settled on the peaceful and bounteous foot of Mount Kenya after fleeing war and hunger. When ninety-nine suitors arrive on their land, seeking to marry their famously beautiful daughters, called The Perfect Nine, the parents ask their daughters to choose for themselves, but to choose wisely. First the young women must embark on a treacherous quest with the suitors, to find a magical cure for their youngest sister, Warigia, who cannot walk. As they journey up the mountain, the number of suitors diminishes and the sisters put their sharp minds and bold hearts to the test, conquering fear, doubt, hunger and many menacing ogres, as they attempt to return home. But it is perhaps Warigia's unexpected adventure that will be most challenging of all.