A debut collection of fiction, these five short stories and novella shape the dust of the past. My Monticello pulsates the contemporary moment’s terror and uncertainty, during which the vestiges of American chattel slavery grasp the grooves of our fingerprints. Who and what are we the product of, and what is the future of this current birthing?

I lived on the coast of North Carolina for a couple of years—the last port of the Confederacy. Spanish moss lined narrow roads and heavy humidity lined my shoulders. In one pocket of my mind, I would create images of the Black people who lived there in decades past. In another, I remembered the Black people nearby, in the present, walking across the street, inside graves. How many bodies have disintegrated beneath us? Autumn brings with it travels into the unknown through pathways of ownership—entering wild terrain outdoors, exploring a muscular bloodstream, and waves of memory within.

And there it is, across the field: My Monticello by Jocelyn Nicole Johnson. A debut collection of fiction, these five short stories and novella shape the dust of the past. This collection pulsates the contemporary moment’s terror and uncertainty, during which the vestiges of American chattel slavery grasp the grooves of our fingerprints. Johnson turns this legacy over repeatedly by assembling a cast of characters, human and non: bias and disillusionment in the homebuying process (a reminder of our attempt at precarious wealth), a punitive lack of safety in the classroom, the clinical social distance of racial experiments, and—of course—Thomas Jefferson, Sally Hemings, and the Monticello plantation. As you make your way through this collection, think about the living and the dead. Who and what are we the product of, and what is the future of this current birthing?

Scroll, listen, swipe, turn—however you consume books these days. Would you like to experience the homebuying process in a global crisis? Check. In the case you need reminders of the legacy of racial discrimination and financial strife, travel through a playful listicle in “Buying a House Ahead of the Apocalypse”. Vote, march, pray. In the historical title novella—which is set to be a Netflix film after being anthologized in Best American Short Stories 2018 edited by Roxane Gay and praised by Colson Whitehead—a white militia terrorizes a group of people, one of them being a descendant of Jefferson and Hemings. This time they want her land, not her body. Watch. Scream! Hold your tongue. Hear the birds cry? Try again.

In My Monticello, I have had the pleasure of observing a set of transient spells, an entryway into the power of narrative perspective. Johnson favors the second person and the inclusive first over the third in an attempt to telescope intimacy and desire. Note how commands redirect a father’s movements as he outruns shame and a secret in “The Kind of Xandria”. The stories are declarations on how to be, where and when can we roam, leave, and perhaps exist. A tour through an upbringing, small worlds past filled with bodies and documents marked by memory inspire future possibility in “Virginia Is Not Your Home”. That sighting on the right? “Something Sweet On Our Tongues”, featuring limits on your bodily autonomy, constricting mouths and voices during a lesson in grade school etiquette.

What are the lengths we will go to prove our humanity, and for whom? In “Control Negro”, a family unravels as an academic makes his son the subject of a study on racism. My Monticello asks us to contemplate our definition of ethics. At what point do the terrors of a private, selfish life outweigh the gains of outward success? In what ways does informing the readers and the academic’s son of intent at the outset both strengthen and absolve harm? And what traits should we assign to authority figures in and outside the family?

In pondering these questions, I want us to exercise patience as we wait for the arrival of answers. There are things we may never find the language for, and other things we may simply never know. Are we okay with not knowing? Johnson reminds us of the importance of pacing ourselves through italics, line breaks, and simple clarity: I want, I want, I want. This repetition litters the title novella, and elsewhere. I tracked this word—want—across the collection, across characters and narrators speculating about one another, across the inner folds of intention. I thought about the persistence of desire, how it unfurls itself through pain. Even more, I’m reminded of pain’s lateral movements far below surface-level happenings, waiting to erupt and compound charged events. What do you consider a charge?

Across geographic sites in the Virginias—Charlottesville, Alexandria, Lexington, the plantation, the classroom, the body, the body within a body, the mind—and across images and ghosts and other beings in the present moment thinking, whispering, sipping, swallowing, and digesting, Johnson builds pieces of familial and societal contradiction, asking: will we accept this manifestation?

ASHLEY LEE is an artist from the Midwest.

JOCELYN NICOLE JOHNSON is the author of My Monticello, five stories and a novella all set in Virginia, forthcoming from Henry Holt on October 5th, 2021, and selected by National Book award winner Charles Yu as his most anticipated book for the year. Johnson has been a fellow at TinHouse, Hedgebrook and VCCA; her writing has appeared, or is forthcoming, in Guernica, The Guardian, Kweli, Joyland, Phoebe, Shenandoah, Prime Number Magazine, and elsewhere. Her short story , “Control Negro”, was anthologized in Best American Short Stories 2018, guest-edited by Roxane Gay who called it “one hell of a story” and read live by LeVar Burton as part of PRI’s Selected Shorts series. A veteran public school art teacher, Johnson lives and writes in Charlottesville, Virginia. 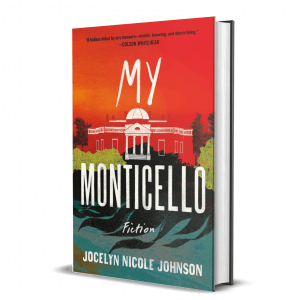 A young woman descended from Thomas Jefferson and Sally Hemings driven from her neighborhood by a white militia. A university professor studying racism by conducting a secret social experiment on his own son. A single mother desperate to buy her first home even as the world hurtles toward catastrophe. Each fighting to survive in America. United by these characters’ relentless struggles against reality and fate, My Monticello is a formidable book that bears witness to this country’s legacies and announces the arrival of a wildly original new voice in American fiction.