Everyone expects us to fail, and to succeed is to be the exception. The space between renders us unremarkable. It’s in this novel that we are given the freedom to fall short of expectations, given permission to just be in our Blackness.

“I am good, but not good enough, which is worse than simply being bad.” When Edie says this she is referring to her art, however, upon reading this sentence, I remember feeling a certain sobering sensation. I was called back home into my body existing in the present and away from the murky, dissociative state one falls into when you are not perceived as a person. I had heard some or other variation of this line before, whether from my own mind or the lips of the other Black women in my life. As Black women, nearly all of us are familiar with the dichotomy between perfection and imperfection, with the pressure to shape and shift ourselves within the parameters of what society has allowed us. We perform ‘womanhood’ perfectly, but it seems not perfectly enough as we are reminded often that we are neither seen as woman nor human. We play at being shy lest we be seen as aggressive, and we are much too kind in the hopes of even receiving the slightest sliver of generosity in return. We aim to make no mistakes: the cost of these is too great. Everyone expects us to fail, and to succeed is to be the exception. The space between the two renders us unremarkable.

While our struggle for perfection isn’t going anywhere, Raven Leilani’s Luster is a sharp, sparkling, and beautiful debut novel that presents us with a devastatingly human Black female protagonist. Luster pulls us into the internal landscape of Edie, a twenty-three-year-old artist struggling to make ends meet. In an attempt to reignite her passion for painting, she finds herself thrust into the family life of her latest infatuation: a middle-aged white archivist in an open marriage with an autopsist, both parents to an adopted Black daughter. It is in this novel that we are granted the freedom to fall short of expectations, granted permission to just be in our Blackness. In her interview with Pan Macmillan, Leilani says: “perfection is boring, invulnerable. I wanted to be vulnerable on the page, and for Edie to be afforded that right as well.”

Edie is masterfully crafted. We are not sold a perfect individual, a Black woman who can do no wrong, and this is how we as readers are reeled into the world of Luster. Make no mistake, this is not necessarily the first time we encounter ‘chaotic’, ‘messy’, or ‘troublesome’ Black women in the media. She exists as Queenie, Candice Carty-Williams’ titular character, or even Nel and Sula from Toni Morrison’s Sula. On television, she appears as Issa Dee in Insecure and Arabella in I May Destroy You. Edie’s imperfection, however, stands tall in a literary landscape that is overwhelmingly populated with quirky, cute, and messy white female protagonists, all the while asking a whole lot more of women of colour. We have seen the price Black women have to pay for being perfect and how they are received by audiences in characters such as Michaela in How to Get Away with Murder, Maxine in Living Single, or Hazel in The Other Black Girl.

Take for example Aria, the only other Black female colleague at Edie’s publishing house. Aria, who arrived at the job “primed to be a token” and who has mastered the art of being “black, dogged, and inoffensive”, upholds this mask of perfection so she may stand apart from Edie, the slacker who has inappropriate sexual relationships with colleagues and no “impulse control”. Edie becomes exactly “what they expect” from Black women and is punished for rejecting the role of Grateful Diversity Hire. A struggle that many of us know, Edie’s predicament inspires empathy as we mourn the loss of our identity and humanity at work.

We also feel for Aria as we are also all too familiar with cosplaying perfection. In fact, an aspect of Luster which I find is often overlooked is the traumatic toll of said cosplaying and the effect a confused sense of self often has on creativity. We know our protagonist is a painter, yet she does not paint, her energy stolen by the disparity of systemic oppression. It’s therefore amusing that when Edie starts painting again, it is in her white boyfriend’s house and with the help of her white boyfriend’s wife, who bestows her with badger-haired paintbrushes and the loveliest oil paints. It’s with grace to the privileged—the human manifestations of said systems of oppression—that she is able to create again, and this irony reveals a life dictated by external forces.

In the white people’s house, Edie tries to find her way back to self-portraits. She arrives at a block, a “synaptic failure” between her brain and hand, and is unable to find herself in her art. We later learn she is frozen in time, held captive by a recent, traumatic abortion that had her painting until the early hours. She thinks back to the procedure and how when she told the nurse she was an artist, she wished “it wasn’t a lie” and how in that moment, she had truly wanted to believe she was a real artist. One of the last pieces Edie paints is of Rebecca, Eric’s wife, rendering her likeness faithfully through the “gorgeous data” of her nudity. Note it is not herself that she paints: she is still healing, waiting patiently to be seen.

Even though Edie lives under the shadow of internal and external conflict, light shines through in the most unexpected of ways. She strikes up an odd, comforting friendship with Rebecca and a beautiful relationship Akila, the adopted daughter and “invisible girl”. Motherhood may not have been an option for Edie, but she demonstrates tenderness and patience with the young pre-teen (even when she is a little frosty with her). Eric comes down to find them on the day of Comic Con, ready with remark, but spares them as he sees them bonding over ritual haircare and doing “Something Black”. He recognises something he can never offer Akila, an understanding that is almost spiritual. There is some safety in our identity, in those things others will never understand and are known only to us.

A desire expressed many a time by me and other Black women is the desire to be seen and heard, to be afforded the space to stumble, learn, and grow. In Luster, I found all these things and more. It was as if my internal dialogue had manifested on the page, every facet of my personhood finally reflected back to me in the form of words. It was a reckoning with all my mistakes and flaws, and an opportunity to escape the mental self-flagellation by integrating them into my sense of self. I found beauty and respect for all the traits I wanted to hide in fear of being seen as odd, too Black, not Black enough, or not womanly enough. I was reminded that, like everyone else, I am living the human experience, a welcome respite from the cage of being other and playing superwoman. Embrace fallibility as it gives you stories to tell, and those stories are proof that you were here.

HOPE NDABA is Communications Executive currently in publishing and is based in London. She loves to read books featuring fairly unhinged characters, queer stories and books where ‘nothing happens’. Find her @hopeisreading.

RAVEN LEILANI’S debut novel, Luster, is out with FSG. Her work has been published in Conjunctions, The Cut, and New England Review, among other publications. Find her at @RavenLeilani on Twitter and @raven_leilani on Instagram. 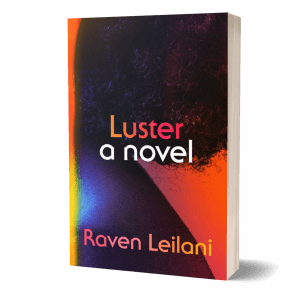 Edie is stumbling her way through her twenties—sharing a subpar apartment in Bushwick, clocking in and out of her admin job, making a series of inappropriate sexual choices. She is also haltingly, fitfully giving heat and air to the art that simmers inside her. And then she meets Eric, a digital archivist with a family in New Jersey, including an autopsist wife who has agreed to an open marriage—with rules. Irresistibly unruly and strikingly beautiful, razor-sharp and slyly comic, sexually charged and utterly absorbing, Raven Leilani’s Luster is a portrait of a young woman trying to make sense of her life—her hunger, her anger—in a tumultuous era.