Kemi, Brittany-Rae, and Muna experience Stockholm in vastly different ways relative to their Blackness but all three are, fundamentally, devastatingly lonely. Solitude is the real story of In Every Mirror She’s Black, a unique distillation of commercial and literary fiction that ultimately hits like a tragedy.

Imagine the thrilling pacing of gripping genre fiction, the socio-political urgency of literary fiction, and the sharp clarity of non-fiction, all thrown together to tell a story that has never been told before: the story of Black women in Sweden. Lolá Ákínmádé Åkerström’s fiction debut—an award-winning Nigerian-Swedish travel photographer and writer living in Stockholm who has graced the pages of National Geographic, Lonely Planet, and New York Times—is that book, taking the best of all worlds and creating a new one. I read it religiously over the course of a single Sunday, delighting in how it effortlessly weaves a rich tapestry of intersecting issues including the violence of class, the trials of womanhood, the tribulations of Blackness, the inequalities of immigration, the pitfalls of love, and the importance of community without every sacrificing good ol’ plot-driven storytelling.

In Every Mirror She’s Black braids together and slips between three different narrative perspectives. The three protagonists—Kemi, Brittany-Rae, and Muna—do not initially know one another or that they have all moved to Sweden because of the same powerful white man, the extremely wealthy businessman and Swedish society ‘golden boy’: Jonny von Lundin (pronounced ‘Yonny’ in Swedish). Ákínmádé Åkerström has repeatedly said that Black women do not usually move to Sweden without a good reason and in In Every Mirror She’s Black, Jonny von Lundin is initially little more than a shockingly blond and blue-eyed narrative device fulfilling that function.

An award-winning marketing executive, Nigerian-American Kemi is hoping to find the same success in love that she has found in her career when she suddenly receives a job offer she can’t turn down. Von Lundin, one of the biggest marketing companies, asks her to join them as their first Director of Diversity and Inclusion following a pitiful PR scandal surrounding a tone-deaf (read: racist) campaign. Brittany-Rae is an ex-model and airline hostess who finds herself wanting more than her thankless job and the marriage-minded man she has waiting for her back home. When a powerful businessman pursues her with all his might, she is caught up in a sensual whirlwind of luxury and opportunity. On the surface, Muna’s story is somewhat different: she is a refugee from Somalia who is looking for escape and security from the trauma she has endured but, ultimately, these three all know what it is to be a Black woman in blindingly white spaces.

They don’t call it Stockholm Syndrome for nothing. Kemi, Brittany-Rae, and Muna repeatedly describe the city as a tease, an impenetrable fortress of whiteness that lures you with its beauty and then turns horrendously ugly once it has you in its hold, constantly making a show of reminding you that it will never have you in its heart. In line with Jonny Pitts’ Afropean, a “pioneering travelogue about continental Black Europe,” In Every Mirror She’s Black starts a conversation about what it means to be Black in Europe. In short, it’s a deeply lonely and isolating experience to be Black in a white country where there is not much of a Black community. What these women share, perhaps even more than their collective Blackness, is how devastatingly lonely they are.

We know that this fact holds true for all women: the more educated they are, the more likely they are to remain single. But with 1 in 3 African American men subject to mass incarceration and all three of them subject to structural anti-Blackness in all its various guises, that truth is compounded for Black women. Here we find the story of Kemi, an attractive and successful Black woman that cannot seem to find a Black man who can match her paycheck or a white man who wants more than her body. Brittany-Rae—isolated in Jonny von Lundin’s world of private jets, sleek luxury homes, and personal assistants at her every beck and call—finds herself with all but the companionship of someone who looks like her, leaving her to become little more than a black prop in this mirage of perfection. And Muna—having lost her family, lover, housemates, and only friend in a benevolent older Swedish lady—is left unmoored in a foreign land where endless obstacles bar her progress at every turn.

While we might expect these three Black women to band together, life is not that simple and contrary to common belief, all Black people are not friends! In Every Mirror She’s Black targets the idea that Blackness is monolithic, that all Black people share the same fundamental characteristics. Across class, career, and culture, Kemi, Brittany-Rae, and Muna experience Stockholm in vastly different ways relative to their Blackness. That simultaneous proximity and distance, collectivity and solitude is the real story of In Every Mirror She’s Black, a unique distillation of commercial and literary fiction that ultimately hits like a tragedy. It’s the story of the psychological, and even physical, danger that befalls us in the absence of a community that understands, accepts, and loves us for who we are. It’s the story of being Black in Europe.

Award-winning writer and photographer LOLÁ ÁKÍNMÁDÉ ÅKERSTRÖM has photographed and dispatched from 70+ countries for various publications. She is the 2018 Travel Photographer of the Year Bill Muster Award recipient. Her work has appeared in National Geographic, BBC, CNN, The Guardian, New York Times, The Sunday Times, Lonely Planet, amongst others. In addition to contributing to several books, she is the author of the 2018 Lowell Thomas Award winner for best travel book, Due North, and the bestselling LAGOM: Swedish Secret of Living Well. In Every Mirror She’s Black is her fiction debut. Find her on Instagram, Twitter, and her website. 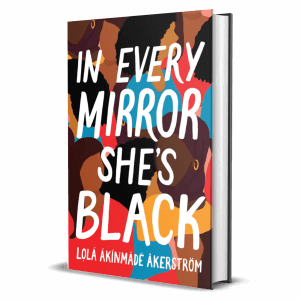 Three Black women are linked in unexpected ways to the same influential white man in Stockholm as they build their new lives in the most open society run by the most private people. Successful marketing executive Kemi Adeyemi is lured from the U.S. to Sweden by Jonny von Lundin, CEO of the nation's largest marketing firm, to help fix a PR fiasco involving a racially tone-deaf campaign. A killer at work but a failure in love, Kemi's move is a last-ditch effort to reclaim her social life. A chance meeting with Jonny in business class en route to the U.S. propels former model-turned-flight-attendant Brittany-Rae Johnson into a life of wealth, luxury, and privilege—a life she's not sure she wants—as the object of his unhealthy obsession. And refugee Muna Saheed, who lost her entire family, finds a job cleaning the toilets at Jonny's office as she works to establish her residency in Sweden and, more importantly, seeks connection and a place she can call home. Told through the perspectives of each of the three women, In Every Mirror She's Black is a fast-paced, richly nuanced yet accessible contemporary novel that touches on important social issues of racism, classism, fetishisation, and tokenism, and what it means to be a Black woman navigating a white-dominated society.