“I am not a planner”: A conversation with Chibundu Onuzo

On a slow Monday morning in mid-June, I am chatting to the fresh-faced Chibundu Onuzo over Zoom a few days after the publication of her third novel, Sankofa. Borne out of her PhD research on the West African Student Union of 1920s London, Sankofa marks a stark departure from her first two novels which are both rooted in the urban tales of Lagos. Though her first novel, The Spider King’s Daughter, came out when she was 19 and made her the youngest person ever to be published by Faber & Faber, Onuzo shares that writing never seemed like a viable profession growing up and how her astronomical success is almost accidental. Other topics broached include what it’s like for a non-planner to fashion a novel out of a PhD and how Sankofa relates to the cultural coordinates that orient it in modern day Ghana.

Jane: How has publication week been? Are things getting back to ‘normal’ as far as book launches go?

CHIBUNDU: Yes, it’s been good. The book came out on Thursday, so it’s just right at the beginning. I’m looking forward to what the future holds. COVID-19 has definitely affected it because. For my first two books, I had an in-person launch. This time I was on Zoom for almost everything. And most of the events I’m doing, even when they are live and we meet in person, there is no audience.

Jane: How long did it take you to write Sankofa? I know you wrote alongside your PhD research on the West African Student Union of 1920s London.

Jane: What was it like to move between the factual and fictional on a daily basis?

CHIBUNDU: I think it helped. They complemented each other actually. The PhD research was very helpful to know what students at the time were thinking about, to know what someone like Francis would have been thinking about, to know what his concerns would have been. I drew on that research heavily when I was creating the character of Francis. The research helped with his character whereas Anna is a different type of character. She’s more contemporary. The fictional aspect of creating Anna’s life was very different from the PhD research that I was doing.

Jane: I really loved the book. Bamana is a fictional country clearly modelled on Ghana with its recognisable landmarks like Cape Coast Castle and the Volta Dam. Why did you invent a country and what type of place did you want to evoke?

CHIBUNDU: Thank you. Well, I think part of the reason why I’m interested in Ghana is because I feel like Ghana has a very real history. So yes, I didn’t want to, like if someone says the first Prime Minister of Ghana, you will instantly think of Dr. Kwame Nkrumah. Setting it in a real place would make it more difficult because real places have their own specific post-independence history. It made sense to make the country fictional, but also because it draws heavily from both Ghana and from other African countries. I think I was also trying to make the point that the story of Bamana could be the story of any other post-independence African country, particularly with that idea of squandered hope. You had these idealistic post-independence leaders with these grand dreams and grand visions that said they were going to lead us into the promised land. Where did it go wrong? You can relate that feeling to many different African countries.

Jane: You started writing seriously at age 10 and are the youngest woman ever to have been published by Faber & Faber. Did you always know you wanted to be a writer?

CHIBUNDU: I didn’t know that you could be a writer as a job as a full-time job! In Nigeria, I had some examples of people who were writers and had published books, but they would often do that alongside a day job. In Nigeria, we do celebrate our writers like Chinua Achebe, Wọlé Ṣóyíinká, other really big figures, and more recently Chimamanda Ngozi Adichie. So, we do have a culture of celebrating writers. But at the same time, we also have this social pragmatism which says that the arts don’t make you money. If you want to do the arts, go ahead and do them, but you need to have a day job.

It wasn’t something that I actually thought I could do full-time when I started writing at age 10. I remember at that age, I use to say I wanted to be a lawyer or a doctor. But I would always be writing at night or in the evenings. Writing was the dream, but that was the only way I could think of doing it. And then I moved here. I think it helped, starting young. Having a degree of success at a younger age meant that I could pursue it and just see where it went. And that’s what I did. I didn’t set out aiming to make it a full-time career because I was still at university when my first book came out. I could also have gone on to, I guess, apply for a ‘normal’ nine to five job. But after I wrote the first book I was like, okay, let’s see where it goes. And here we are.

Jane: All your characters are very distinct and you write them with so much compassion. What’s the process like for you?

CHIBUNDU: I am not a planner. I don’t start the novel and know where it’s going to end. Generally, I start a novel and I see how it goes. I started with Anna and Francis. But, for example, Anna’s husband, Robert, I knew I didn’t want Anna to actively be in a marriage because I thought if she was more rooted, it might be more difficult for her to take off from England at 48 and say, I’m travelling to West Africa to find my father. There might have been more of a struggle there. Then I wasn’t sure if I wanted her husband to be dead [collective laughter], or if I wanted him just to be in the picture without them being actively married. I separated them in the end.

So, I don’t start with a clear idea of all of the different characters. It’s the same with Anna’s daughter. I had to make her daughter an age where Anna would be able to leave London without any cares. She just had to be at a place in her life that wasn’t too rigid. For example, her daughter has her own life now: she’s working and she’s doing her own thing. Anna had to be at a place in her life where she’d be able to just say: “I have nothing to lose. I have nothing holding me down in London. Let me go and find this man.”

Jane: Did someone in specific inspire that man or is it, like with the story of Bamana, any post-independence leader?

CHIBUNDU: Oh, yeah, definitely. It could be any. He is a blend of so many different things I’ve read, and I guess things I’ve imagined. There is definitely no one person in particular that inspired him.

Jane: The Back to Africa movement is certainly having its heyday at the minute with Ghana’s Year of Return campaign. Did this zeitgeist influence Sankofa or was it just a complete coincidence?

CHIBUNDU: [Pauses] I think it’s definitely a coincidence because I started it before Ghana had the big push for the year of return. But I think that sometimes when things are seen to be coincidental, there is also a feeling in the air. I think for many years now the African diaspora has been increasingly looking back to the continent. It’s been gathering momentum, slowly and slowly. It’s been in the air for a while now, even though this formal government push is more recent. For instance, Maya Angelou lived in Ghana decades ago. There is a long history of the African diaspora coming back to the African continent. And of course, Alex Haley’s Roots. The story’s been here.

Jane: Is that Anna’s story too?

CHIBUNDU: Her story is slightly different. She’s not going back to find a culture. I think if you’re from the societies in which Africans were taken across as slaves, you’re returning to the continent to find your culture, but it’s more difficult to actually trace back to your family. Anna is going to find her father. The cultural aspect is secondary. She just really wants to know who her father is. And then along the way, she might learn something about the culture.

CHIBUNDU ONUZO was born in Lagos, Nigeria. Her life so far spans two military dictatorships, one internet revolution, two boarding schools, five grandmothers and a first book deal signed at nineteen. Chibundu’s first novel, The Spider King’s Daughter, was published by Faber in 2012 and was the winner of a Betty Trask Award, shorted for the Dylan Thomas Prize and the Commonwealth Book Prize and longlisted for the Desmond Elliott Prize and Etisalat Literature Prize. Her second novel, Welcome to Lagos, was published by Faber in 2017 and shortlisted for the RSL Encore Award. In 2018 Chibundu was elected as a Fellow of the Royal Society of Literature, as part of its “40 Under 40” initiative. She contributes regularly to the Guardian, has done a talk for Tedx and her autobiographical show 1991, featuring narrative, music, song and dance, premiered in a sell-out show at Southbank Centre’s London Literature Festival in 2018. Find her on Twitter and Instagram @chinbunduonuzo. 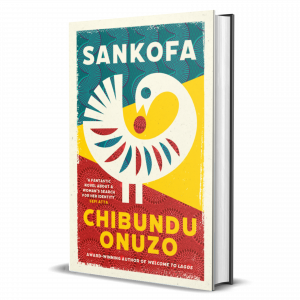 Anna grew up in England with her white mother and knowing very little about her African father. In middle age, after separating from her husband and losing her mother, Anna finds her father's student diaries, chronicling his involvement in radical politics in 1970s London. She discovers that he eventually became the president—some would say the dictator—of the West African country of Bamana. And he is still alive. Anna decides to track him down and her journey will lead her to a new understanding of both her past and her potential future, as well as an exploration of race, identity and what we pass on to our children.