“I hope Black girls will leave the book feeling that alrightness”: A conversation with Tamara Winfrey Harris

Natasha: I finished Dear Black Girl: Letters From Your Sisters on Stepping Into Your Power last night and I was like, man, this is the chicken soup for the teenage soul I needed when growing up and didn’t have. What made you feel that this collection was so needed?

TAMARA: Part of it was because of the ways that I heard women talking about girls while I was touring around with my first book. I found that a lot of time in groups of Black women, we would reject the stereotypes for us but then when we started talking about younger women and girls, that same language started creeping in. That really struck me and it sat with me. Then I started interviewing some teenage girls and I wondered, how were these girls receiving those messages? Did they feel unsupported? Throughout the interviews, I heard that, yes, they do sometimes feel unsupported because of the ways in which we seem to repeat the things that society thinks about them. I wanted Black girls to feel loved and supported, no matter who they were, no matter what they looked like, no matter what things had happened to them, and no matter what mistakes they’ve made.

Natasha: I was telling someone about how this is the first time I’ve read a book directed at Black girls that made me feel seen as someone of lighter complexion who grew up in the suburbs.

TAMARA: I’m a suburbs girl. A lot of the girls I interviewed were suburban girls. It’s true that some of us are more vulnerable than others. There are girls living in poverty, there are dark-skinned girls and girls who have extra burdens, but we are all experiencing sexism and racism.

Natasha: It’s the universal myth of being a Black girl and having a Black mom, no matter where you grew up. My favorite letter starts on page 46 with “Daughtering ain’t easy.” Which letter resonates with you the most?

TAMARA: This one resonates with me the most not because it is my experience, but because it was the first letter that I ever received. It’s the one that starts on page 97 with “Good evening darling”. It’s from a woman named Nicole talking about growing up with two parents who were infected with HIV. She talks about poverty and dropping out of school. Then she talks about what her life looks like now (she’s doing well). But it’s not even that. It’s the way she talks to Black girls with such love. She says: “Know that you are not alone. You are not invisible. I see you. You are capable. You are powerful. You are worthy. You are part of a larger community and with us. You are home.” I just feel like those words are so beautiful.

Natasha: That’s the one that made me cry. My son was like, mom?!

TAMARA: At least you were at home! I was at work when the letter came through in my email and I couldn’t resist checking it. I was sitting there at my desk like [mock weep].

Natasha: If you could pick another non-fiction book as a companion to this book, what would it be?

TAMARA: This is a little bit of a cheat, but I would say my first book (The Sisters Are Alright: Changing the Broken Narrative of Black Women in America). There’s an expanded edition of that coming out on October 12. I think that book discusses the core stereotypes that influence how Black girls and women are seen. It explains how we get so bound up in these biases that are reinforced by society and impact how see ourselves, and how we see each other.

NATASHA: Religion is such a big part of the Black community. We can’t just ignore it. I liked how it was incorporated in Dear Black Girl and how you got to see where you fit in with it.

TAMARA: I asked the women to try not to make assumptions about class, sexuality, or religion. I wanted Black girls to see themselves in all the ways they show up in the world. I know there’s a tendency to assume all Black girls are Christian, but some of us are Muslim. Some of us at Jehovah’s Witnesses. Some of us are not religious at all. Black girls that don’t fit into the box we expect Black girls to fit into are very often left out of the discussion.

Natasha: What would you like people to take away from this book?

TAMARA: I want people to leave feeling loved and affirmed. I talk a lot about alrightness and how sometimes it takes a while for Black women to understand that we are all right, meaning we are inherently alright even if we have problems or flaws. We are okay just as we are. It took me until my 30s, 40s, or 50s, or beyond to understand that I was alright. I thought, what if we could give girls and young women alrightness right now? What if we can start feeling some of that at 15 instead of 55? I hope that people will leave the book feeling that alrightness.

TAMARA: I just finished it. It’s called Yoke: My Yoga of Self-Acceptance by Jessamyn Stanley who is a Black woman and yoga teacher. It is amazing. Last year, I finally got certified after my 200-hour yoga teacher training. This book is all about the influence of yoga in her life and how she has used it to uncover her authentic self, come to terms with herself, and center herself.

Natasha: What are you currently reading?

TAMARA: I just started a book called Black Girls Must Die Exhausted: A Novel for Grown-Ups by Jayne Allen. I’m going to interview her next month at Charris Books & More in Atlanta.

Natasha: Would you ever do a part two?

TAMARA: I would. People keep asking me that. There are many letters that couldn’t make it. The book has sparked these great conversations and when I hear women start talking about girls, talking about themselves as girls, I realise that it could be a chicken soup for Black girls that keeps going on and on. What if Black girls could write to their mothers? What if mothers could write to Black girls? I think that the epistolary format is so strong.

Natasha: It stays fresh. There are some contemporary references, but the message in every single letter is timeless. Are you working on anything new?

TAMARA: I’m working on a proposal for a book that I hope will be about how we will get free together. I hope it will be a guided journal or a step-by-step that Black femmes can work with to get free.

Natasha: I love that. I’ll be looking for both the guided journal and part two [both laugh].

TAMARA WINFREY HARRIS is the author of the award-winning books The Sisters Are Alright: Changing the Broken Narrative of Black Women in America and Dear Black Girl: Letters from Your Sisters on Stepping into Your Power. She has also been published in several media outlets and magazines. Harris wants to empower Black girls and women by letting them know that they are not on this journey alone. You can find her on Twitter and her website.

TASHA MAYS is a mother, blogger, and some-time booktuber. In her free time, she likes to read and craft. If you don’t see her with a book or at a table crafting, she’s probably sleeping or eating. Follow her on socials at @amaysnreads on Twitter and @tashalikesbooks on Instagram. 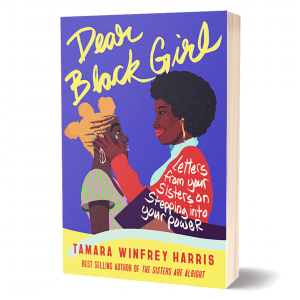 You don't know me, but I know you. I know you because I am you! We are magic, light, and stars in the universe." So begins a letter that Tamara Winfrey-Harris received as part of her Letters to Black Girls project, where she asked Black women to write honest, open, and inspiring letters of support to young black girls aged thirteen to twenty-one. Her call went viral, resulting in a hundred letters from Black women around the globe. In Dear Black Girl, Winfrey-Harris organizes a selection of these letters for young Black girls, modeling how they can nurture their future generations as Black women. Each chapter ends with a prompt encouraging girls to write a letter to themselves, teaching the art of self-love and self-nurturing. Winfrey-Harris's The Sisters Are Alright explores how Black women must often fight and stumble their way into alrightness after adulthood. Dear Black Girl continues this work by delivering personal messages of alrightness for Black women-to-be—and for the girl who still lives inside every black woman, who still needs reminding sometimes that she is alright.